What is Mucus Plug?

Mucus plug is the buildup of secretion in the cervical canal. Cervical gland is responsible for producing mucus plug. The accumulation of mucus plug starts early when a woman is pregnant usually towards end of the first month of pregnancy. 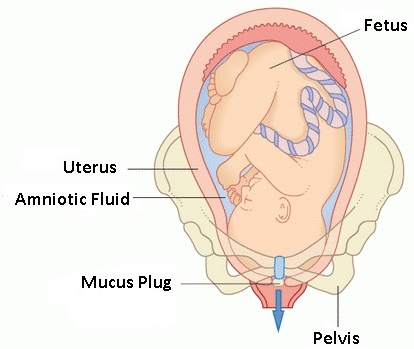 During this time the cervix becomes soft and enlarges to receive cervical mucus secreted by cervical cells. Every time a pregnant ovulates, the cervical mucus becomes thicker forming a dense clot that blocks the uterus opening.
During pregnancy, a woman’s body produces high levels of estrogen and progestin hormones to support cervical gland secretions.

Protects the uterus and baby against infections

Mucus plug contains antimicrobial properties to destroy pathogens such as fungi, bacteria and virus. These pathogens are harmful when they enter the uterus and can cause serious infections to the baby and the uterus

How can you Identify Mucus Plug? 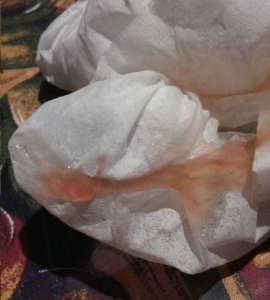 Mucus plug may appear as white or yellow in color with streaks of blood or without. In some cases, the mucus plug may be brown. The presence of blood streak in mucus plug is common since cervix enlarges before labor kicks off.

As a result, the enlarged cervix can cause blood capillaries to burst leading to bleeding. The presence of blood in mucus plug should not worry you, it is normal.
Blood streak in mucus plug also varies among women.

Their (first time pregnant women) uterine cervix walls are thick and the intercellular space cannot stretch further. This exerts a lot of pressure on the blood capillaries causing bleeding.

For a woman who has experienced the process of child birth, the cervical canal inner surface is elastic. The epithelium surface is loose and the intercellular space is able to stretch to allow mucus plug to pass as one piece.

In case such a woman has blood in the mucus plug, it is because of cervical erosion.
For women with cervical canal lesions, scars develop in the inside of their cervical walls. This may be as a result of abortion or infection from pathogens.

These lesions may bleed when uterine walls expand causing blood streaks in the mucus plug.

When is Mucus Plug Discharged?

Normally before labor begins, hormonal balance in the body of a pregnant woman is disrupted. The levels of estrogen hormone increases more than that of gestogen. Once there is an increase in estrogen hormone, fetal formation is assumed to be complete and is cancelled.

Estrogen hormone makes the mucus plug to become thin and is discharged.
The passing of mucus plug shows that labor is on irrespective of gestation age. Mucus plug can come out before or after 37 weeks of pregnancy.

In case mucus plug comes out very early in pregnancy, it indicates that something is wrong in an expectant woman body. Therefore seek urgent medical attention.
Ways through which a Woman Loses Mucus Plug

Every woman passes mucus plug in different ways and time. Some women can pass mucus plug while showering and others during urination. Women can only know they have discharged mucus plug when there is mucus on their panties.

What Next after you Have Passed Mucus Plug?

Once you are sure that mucus plug has come out, relax and do not panic. You can do the following to ensure that all is well:

Normally when you pass mucus plug, it is an indication that labor is near. This may vary among women; some women may go into labor after a few hours of losing the mucus plug, while others go into labor several days later. You need to be very close to the hospital to avoid any complications when labor eventually starts.

Apart from mucus plug coming out, there are other symptoms of labor such as:

This happens when your amniotic sac raptures and discharges fluid. This fluid may be released faster or gradually. Some women can also have contractions after breaking waters in case they missed contractions before.

Dilation is used to determine how open your cervix is. Normally, the cervix of an expectant woman dilates 10 centimeters wide when she is ready to deliver. Before labor starts, your cervix dilates for few centimeters.

Contractions are useful in dilating and thinning your cervix in order to push the baby forward. In case you suspect you are having contractions, note the time between contractions and if this time is consistent. If you notice stronger and consistent contractions, it may indicate labor is near.

Lightening happens when your baby starts moving lower into your pelvic. Lightening is safe and indicates that your baby is getting in the appropriate position to support labor.

Passing mucus plug indicates that your pregnancy is still going on. You can lose your mucus plug during or after 37 weeks of pregnancy.

Usually this should not be an issue of concern, but it is noble to seek medical attention if you have questions. You have to call your doctor if you break waters and notice stronger and regular contractions.