What Is Adam’s Apple?

The Adam’s apple is a laryngeal prominence in the human neck. It is the largest thyroid cartilage in the larynx.

In men it can be seen as a protrusion or lump at the throat due to the acute (close to ninety degrees) angle at which the two portions of cartilage meet. Women have a much less pronounced laryngeal prominence because the cartilage forms an angle of about a hundred and twenty (1200) which creates a subtle open arc. 1,2 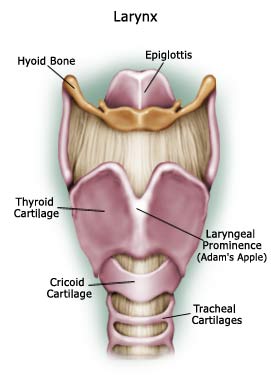 The Adam’s apple has several functions:

There are several simple issues that can cause pain or discomfort in the Adam’s Apple:

More serious conditions that may be bringing about pain in your Adam’s apple include:

Usually people barely feel their Adam’s apple but certain condition can irritate the thyroid cartilage leading to the following symptoms:

It is important to distinguish the underlying cause of Adam’s apple pain before one can be treated. The pain may be due to a simple condition like a sore throat or acid reflux or a more serious condition like thyroid cancer.

To properly diagnose Adam’s apple pain the doctor may do the following:

The pain in the Adam’s apple can be easily diagnosed if it is accompanied by distinct symptoms of causative illnesses e.g